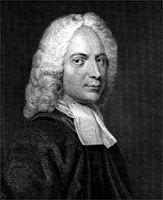 Isaac Watts (1674—1748) is an English hymnist who was influential in developing the tradition of writing new lyrics to be sung in worship services, rather than remaining limited to versifications of the Psalms. He and his family were Dissenters or Non-Conformists, and so he was not eligible to attend Oxford or Cambridge. It is said that when he complained about the poor writing in the metrical Psalter, his father challenged him to do better. Although he wrote about 600 hymns, he is best known for those he wrote over a two year period, beginning when he was just 20.

Some of his best known hymns include, "When I Survey The Wondrous Cross", "Jesus Shall Reign Where're the Sun", "O God Our Help in Ages Past", and the Christmas carol "Joy To The World". Since these hymns are so well known, I have opted to share a lesser-known carol.

'Shepherds, rejoice! lift up your eyes
And send your fears away;
News from the region of the skies:
Salvation's born today!
Jesus, the God whom angels fear,
Comes down to dwell with you;
Today he makes his entrance here,
But not as monarchs do.

'No gold, nor purple swaddling bands,
Nor royal shining things;
A manger for his cradle stands,
And holds the King of kings.
Go, shepherds, where the Infant lies,
And see his humble throne;
With tears of joy in all your eyes,
Go, shepherds, kiss the Son.'

Thus Gabriel sang, and straight around
The heavenly armies throng;
They tune their harps to lofty sound
And thus conclude the song:
'Glory to God that reigns above,
Let peace surround the earth;
Mortals shall know their Maker's love
At their Redeemer's birth.'

Lord! and shall angels have their songs
And men no tunes to raise?
O may we lose these useless tongues
When they forget to praise!
'Glory to God that reigns above,
That pitied us forlorn!'
We join to sing our Maker's love,
For there's a Saviour born.