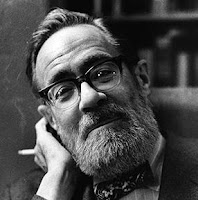 John Berryman (1914—1972) is a major figure in late 20th century American poetry, and is particularly significant within the confessional school. He won the Pulitzer Prize for his collection 77 Dream Songs in 1964. Even after his conversion to Christian faith, he suffered from alcoholism and depression, which led to his suicide in 1972.

According to Paul Mariani, whose biography Dream Song: The Life of John Berryman appeared in 1990, Berryman experienced "a sudden and radical shift from a belief in a transcendent God ... to a belief in a God who cared for the individual fates of human beings and who even interceded for them."

Dwight Cramer has said about Berryman's first posthumous collection Delusions, Etc., which had been edited for publication prior to his death, "A religious faith never entirely defined accompanies Berryman's despair. It is a faith that invokes God as a protector but does not explore the Divine nature. It revolves less around God than around the poet's personal need for Him." This can be seen in the following poem, in how Berryman chooses what he wants to believe, and what he doesn't, and his emphasis on happiness, as opposed to a life of sacrifice and service.

I really believe He’s here all over this room
in a motor hotel in Wallace Stevens’ town.
I admit it’s weird; and could–or could it?–not be so;
but frankly I don’t think there’s a molecular chance of that.
It doesn’t seem hypothesis. Thank heavens
millions agree with me, or mostly do,
and have done ages of our human time,
among whom were & still are some very sharp cookies.
I don’t exactly feel missionary about it,
though it’s very true I wonder if I should.
I regard the boys who don’t buy this as deluded.
Of course they regard me no doubt as deluded.
Okay with me! And not the hell with them
at all–no!–I feel dubious on Hell–
it’s here, all right, but elsewhere, after? Screw that,
I feel pretty sure that evil simply ends
for the doer (having wiped him out,
but the way, usually) where good goes on,
or good may drop dead too: I don’t think so:
I can’t say I have hopes in that department
myself, I lack ambition just just there,
I know that Presence says it’s mild, and it’s mild,
but being what I am I wouldn’t care
to dare go nearer. Happy to be here
and to have been here, with such lovely ones
so infinitely better, but to me
even in their suffering infinitely kind
& blessing. I am a greedy man, of course,
but I wouldn’t want that kind of luck continued,–
or even increased (for Christ’s sake), & forever?
Let me be clear about this. It is plain to me
Christ underwent man & treachery & socks
& lashes, thirst, exhaustion, the bit, for my pathetic & disgusting vices,
to make this filthy fact of particular, long-after,
faraway, five-foot-ten & moribund
human being happy. Well, he has!
I am so happy I could scream!
It’s enough! I can’t BEAR ANY MORE.
Let this be it. I’ve had it. I can’t wait.