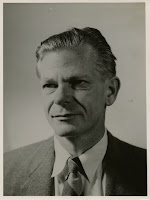 James McAuley (1917—1976) is an Australian poet who was conservative both in his politics and in his literary taste. He was involved in Cold War politics as an anti-communist in the Australian branch of the Congress for Cultural Freedom. His 1959 essay collection, The End of Modernity: Essays on Literature, Art and Culture, advanced his credentials as a conservative thinker.

From his position as editor of the literary journal Quadrant, and as Chair of English at the University of Tasmania, he published his influential book-length study of Australian poetry, The Personal Element in Australian Poetry (1970). McAuley's poetry collections include: Under Aldebaran (1946), A Vision of Ceremony (1956), The Six Days of Creation (1963), his epic poem Captain Quiros (1964), and Surprises of the Sun (1969). His Collected Poems appeared in 1971.

The thin distraction of a spider’s web
collects the clear cold drops of night.
Seeds falling on the water spread
a rippling target for the light.

The rumour in the ear now murmurs less,
the snail draws in its tender horn,
the heart becomes a bare attentiveness,
and in that bareness light is born.

Touching Ezekiel his workman's hand
Kindled the thick and thorny characters;
And Seraphim that seemed a thousand eyes,
Flying leopards, wheels and basilisks,
Creatures of power and of judgment, soared
From his finger point, emblazoning the skies.

Then turning from the book he rose and walked
Among the stones and beasts and flowers of earth;
They turned their muted faces to their Lord,
Their real faces, seen by God alone;
And people moved before him undisguised;
He thrust his speech among them like a sword.

And when a dove came to his hand he knew
That hell was opening behind its wings.
He thanked the messenger and let it go;
Spoke to the dust, the fishes and the twelve
As if they understood him equally,
And told them nothing that they wished to know.