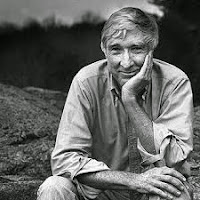 John Updike (1932—2009) is an American novelist, poet, critic and short story writer. He was best known for his "Rabbit" novels, for which he twice won the Pulitzer Prize — for Rabbit Is Rich in 1982, and for Rabbit at Rest in 1991. Although Christian theology is a frequent focus in his novels, they are also preoccupied with expressing sex in explicit detail. The New York Times pointed out in an extended obituary that:

He published a total of eight poetry collections in his lifetime.

Make no mistake: if he rose at all
It was as His body;
If the cell’s dissolution did not reverse, the molecule reknit,
The amino acids rekindle,
The Church will fall.

It was not as the flowers,
Each soft spring recurrent;
It was not as His Spirit in the mouths and fuddled eyes of the
Eleven apostles;
It was as His flesh; ours.

The same hinged thumbs and toes
The same valved heart
That—pierced—died, withered, paused, and then regathered
Out of enduring Might
New strength to enclose.

Let us not mock God with metaphor,
Analogy, sidestepping, transcendence,
Making of the event a parable, a sign painted in the faded
Credulity of earlier ages:
Let us walk through the door.

The stone is rolled back, not papier-mache,
Not a stone in a story,
But the vast rock of materiality that in the slow grinding of
Time will eclipse for each of us
The wide light of day.

And if we have an angel at the tomb,
Make it a real angel,
Weighty with Max Planck’s quanta, vivid with hair, opaque in
The dawn light, robed in real linen
Spun on a definite loom.

Let us not seek to make it less monstrous,
For our own convenience, our own sense of beauty,
Lest, awakened in one unthinkable hour, we are embarrassed
By the miracle,
And crushed by remonstrance.