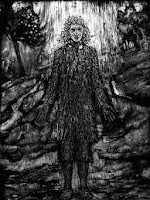 Thomas Traherne (1637—1674) is a British poet — born in Hereford, England — whose work is only recently coming to light and becoming valued. He was mentioned by Samuel Johnson as one of the metaphysical poets, but few knew his work at that time. In the twentieth century Traherne influenced such writers as Dorothy L. Sayers, Thomas Merton, Elizabeth Jennings and C.S. Lewis.

He is venerated as a saint within the Anglican church. In 2007 four stained glass windows by artist Tom Denny, honouring Thomas Traherne, were installed in Herford Cathedral's Audley Chapel. The photo here is of one of these windows.

The following poem in Traherne's Centuries of Meditations is preceded by these words: "Upon those pure and virgin apprehensions which I had in my infancy I made this Poem."

1
That childish thoughts such joys inspire,
Doth make my wonder, and His glory higher,
His bounty, and my wealth more great
It shows His Kingdom, and His work complete.
In which there is not anything,
Not meet to be the joy of Cherubim.

2
He in our childhood with us walks,
And with our thoughts mysteriously He talks;
He often visiteth our minds,
But cold acceptance in us ever finds:
We send Him often grieved away,
Who else would show us all His Kingdom's joy.

3
O Lord, I wonder at Thy Love,
Which did my infancy so early move:
But more at that which did forbear
And move so long, though slighted many a year:
But most of all, at last that Thou
Thyself shouldst me convert, I scarce know how.

4
Thy gracious motions oft in vain
Assaulted me: my heart did hard remain
Longtime! I sent my God away
Grieved much, that He could not give me His joy.
I careless was, nor did regard
The End for which He all those thoughts prepared.

5
But now, with new and open eyes,
I see beneath, as if above the skies,
And as I backward look again
See all His thoughts and mine most clear arid plain.
He did approach, He me did woo;
I wonder that my God this thing would do,

6
From nothing taken first ,I was;
What wondrous things His glory brought to pass!
Now in the World I Him behold,
And me, enveloped in precious gold;
In deep abysses of delights,
In present hidden glorious benefits.

7
These thoughts His goodness long before
Prepared as precious and celestial store
With curious art in me inlaid,
That childhood might itself alone be said
My Tutor, Teacher, Guide to be,
Instructed then even by the Deity.