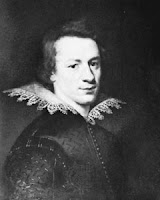 William Dunbar (c1465—c1513) is a Scottish poet, born near Edinburgh, who graduated from St. Andrews University in 1479. He served in the court of King James IV. Most of his poetry comes from his time as a court poet between 1490 and 1510.

Hugh MacDiarmid used the phrase "Back to Dunbar" as a rallying cry to encourage Scottish poets in the twentieth century to transform Scottish verse away from its traditional rustic image, and towards sophistication.

On the Resurrection of Christ

Done is a battle on the dragon black,
Our champion Christ confoundit has his force;
The yetis of hell are broken with a crack,--yetis=gates
The sign triumphal raisit is of the cross,
The devillis trymmillis with hiddous voce,--trymillis=tremble
The saulis are borrowit and to the bliss can go,--borrowit=ransomed
Christ with his bloud our ransonis dois indoce:--indoce=endorse
Surrexit Dominus de sepulchro.--(He is risen from the grave)

Dungan is the deidly dragon Lucifer,--dungan=overcome
The cruewall serpent with the mortal stang;
The auld kene tiger, with his teith on char,--on char=snarling
Whilk in a wait has lyen for us so lang,
Thinking to grip us in his clawis strang;
The merciful Lord wald nocht that it were so,
He made him for to failye of that fang.--fang=plunder
Surrexit Dominus de sepulchro.--(He is risen from the grave)

He for our saik that sufferit to be slane,
And lyk a lamb in sacrifice was dicht,--dicht=prepared
Is lyk a lion risen up agane,
And as a gyane raxit him on hicht;--gyane=giant raxit=reached
Sprungen is Aurora radious and bricht,
On loft is gone the glorious Apollo,
The blissful day departit fro the nicht:
Surrexit Dominus de sepulchro.--(He is risen from the grave)

The grit victour again is rissen on hicht,
That for our querrell to the deth was woundit;
The sun that wox all pale now shynis bricht,
And, derkness clearit, our faith is now refoundit;
The knell of mercy fra the heaven is soundit,
The Christin are deliverit of their wo,
The Jowis and their errour are confoundit:
Surrexit Dominus de sepulchro.--(He is risen from the grave)