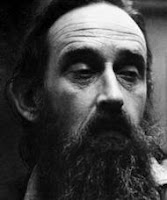 James K. Baxter (1926—1972) is one of New Zealand’s most celebrated poets, and is also known for his plays. In 1944, while still in his teens, Baxter published his first book, Beyond The Palisade. In his early days he was very influenced by the work of Dylan Thomas. Over the next decade his drinking drove him to Alcoholics Anonymous.

Shortly after this he became a Roman Catholic, which significantly influenced his poetry. By the 1960s James K. Baxter had become a prolific writer; his radio play Jack Winter’s Dream (1958) had expanded his international reputation. He began working with drug addicts, and took up the cause of the poor. In 1968 he went to a Maori village called Jerusalem (Hiruharama) because, he says, he was instructed to in a dream. There he established a commune and lived in deprived conditions, which eventually contributed to his death.

Sometimes his voice sounds quite irreverent, such as in “The Maori Jesus”, yet he also wrote such orthodox poems as “Song To The Holy Spirit”, which begins:
--------Lord, Holy Spirit,
--------You blow like the wind in a thousand paddocks,
--------Inside and outside the fences,
--------You blow where you wish to blow.

British poet Godfrey Rust speaks of Baxter as an influence and says, “he should have been Walt Whitman really and was born in the wrong place.”

You, my friend, fallen among thieves,
The parable is harder than we suppose.
Always we say another hand drives
Home the knife, God's malice or the gross
Night-hawking bandit, straddled Apollyon.
We are blinded by the fume of the thieves' kitchen.

To be deceived is human; but till deception end
What hope of a bright inn, Love's oil and wine?
One greasy cloth of comfort I bring, friend
Nailed at the crossroad—I, thief, have seen
The same dawn break in blood and negative fire;
Your night I too could not endure.

Friend, stripped of the double-breasted suit
That left no cold out—if by falling stars
Love come, with ointment for your deadly wound,
Carry you up the steep inn stairs—
What should a thief do, footloose and well,
But rape the landlord's daughter, rummage the till?

Search well the wound, friend: know to the quick
What pain is. Thieves are only taught by pain.
And when, no longer sick,
You sit at table in the bright inn,
Remembering that pain you may sing small, dine
On a little bread, less wine.