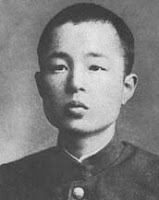 Jūkichi Yagi (1898–1927) is a Japanese poet. He became a devout Christian as a high school student through reading the Bible. At age 23 he became a teacher of English and began writing poetry as an expression of his Christian faith. In 1923, he and his wife, Tomiko, were married. His first book of poems Autumn’s Eye appeared in 1925. During the following year he developed tuberculosis, and remained bed-ridden until he died. During this time he wrote extensively about God and death. It was not until after the posthumous publication of his further poetry that he gained widespread popularity. In 1959 his widow arranged for the publication of The Complete Poems of Jūkichi Yagi.

from Soliloquy in Bed

***
They flow naturally.
What should I do with these tears?

***
I’d like to recover soon
and spread the names of God and Jesus.

***
There are nights when I fall asleep
to the sound of the waves meshing with my thoughts.
There are times when I can’t sleep at all.

***
Tomiko,
I don’t mean that.
I mean that if I must die anyway
then please let me die with a beautiful heart.

***
Tomiko,
when we knew happiness together,
those times when I was to blame for things,
I can now see very clearly.

***
Seen through the window, the sky and flowing clouds—
I turn away from their excessive seriousness.

***
O Heavenly Father,
please save this feeble body and soul
and let me work on behalf of the light of God and Christ.

***
Tomiko,
when not calling God’s name
I’m calling yours.

***
I will be together with the heart of God.

***
Momoko and Yooji,
it’s painful that I can’t see you.
I’m happiest at having been your father
and not anyone else’s.

***
Ah, how wonderful the sound of those waves.
I’d love to go to the beach.

Entry written by D.S. Martin. He is the award-winning author of the poetry collections Poiema (Wipf & Stock) and So The Moon Would Not Be Swallowed (Rubicon Press). They are both available at: www.dsmartin.ca
Posted by D.S. Martin at 4:45 AM