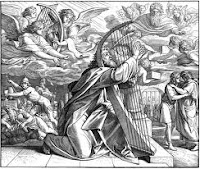 The Sons of Korah have eleven psalms attributed to them (Psalm 42, 44 – 49, 84, 85, 87 and 88). They were Levites (Korah being Levi’s great-grandson) and were a guild of singers, set apart for the worship of Yahweh. Perhaps they were Korah's occupational, rather than biological, descendants. The first person mentioned, in 1 Chronicles 6, as one of the men David placed “in charge of the music in the house of the Lord after the ark came to rest there” was Heman, a descendant of Korah. It is uncertain whether the Sons of Korah composed these psalms, or if they were written for them, or if they were from a collection of psalms that was in their possession. Perhaps Heman was the author of these psalms, since the second person David mentioned is the psalmist Asaph. Heman is identified as the author of Psalm 88, although he is there called “the Ezrahite” – a name not appearing in his genealogy.

The following psalm is from the New International Version.

For the director of music. Of the Sons of Korah.
According to alamoth. A song.

There is a river whose streams make glad the city of God,
-----the holy place where the Most High dwells.
God is within her, she will not fall;
-----God will help her at break of day.
Nations are in uproar, kingdoms fall;
-----he lifts his voice, the earth melts.