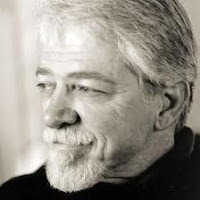 B.H. Fairchild is an American poet who rose to prominence with the attention his third collection The Art of the Lathe (1998) received; it won several awards and was a finalist for the National Book Award. He demonstrates in that collection his preoccupation with craft, and his own history working alongside his father in a machine shop. Fairchild`s poems often deal with working-class people, and the sacramental quality of work. His two subsequent collections are Early Occult Memory Systems of the Lower Midwest (2003) which received the National Book Critics Circle Award, and Usher (2009).

It has been said that “Fairchild`s faith is not something proclaimed; it is something inhabited.” In an Image interview with Paul Mariani, Fairchild said that “being a Christian no longer seems to present a problem of belief for me, or at least not in the same way it once did... It`s simply who I am.”

Dust storm, we thought, a brown swarm
plugging the lungs, or a locust-cloud,
but this was a collapse, a slow sinking
to deeper brown, and deeper still, like the sky
seen from inside a well as we are lowered down,
and the air twisting and tearing at itself.

But it was done. And the body hung there
like a butchered thing, naked and alone
in a sudden hush among the ravaged air.
The ankles first—slender, blood-caked,
pale in the sullen dark, legs broken
below the knees, blue bruises smoldering
to black. And the spikes. We tugged iron
from human flesh that dangled like limbs
not fully hacked from trees, nudged
the cross beam from side to side until
the sign that mocked him broke loose.
It took all three of us. We shouldered the body
to the ground, yanked nails from wrists
more delicate, it seemed, than a young girl’s
but now swollen, gnarled, black as burnt twigs.
The body, so heavy for such a small man,
was a knot of muscle, a batch of cuts
and scratches from the scourging, and down
the right side a clotted line of blood,
the sour posca clogging his ragged beard,
the eyes exploded to a stare that shot
through all of us and still speaks in my dreams:
I know who you are.

------------------------So, we began to wash
the body, wrenching the arms, now stiff
and twisted, to his sides, unbending
the ruined legs and sponging off the dirt
of the city, sweat, urine, shit—all the body
gives—from the body, laying it out straight
on a sheet of linen rank with perfumes
so that we could cradle it, haul it
to the tomb. The wind shouted.
The foul air thickened. I reached over
to close the eyes. I know who you are.