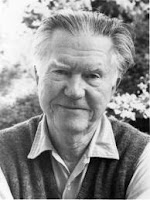 William Stafford (1914 —1993) was a conscientious objector during World War II. At that time he worked in an alternate forest service work camp, operated by the Church of the Brethren. While doing this work in California, he met and married his wife, Dorothy, the daughter of a minister in that denomination. He later spent one year teaching at a college associated with the Church of the Brethren, although the balance of his teaching career was at Lewis & Clark College in Oregon.

Poet Donald Hall compares Stafford to other poets of his generation — many of whom were also conscientious objectors, and many of whom died too young. Hall says, “But Stafford is a low-church Christian far from the rhetorical Catholicism that Lowell and Berryman entertained. I suspect that his survival is related not merely to his Christianity but to his membership in a small, embattled, pacifist sect.”

The following comes from a poem, which Stafford wrote on the day he died:

In 1963, when he was 48, he won the National Book Award for Traveling Through the Dark — his first major poetry collection. Despite this late start, he eventually published 57 poetry books. In 1970 he was appointed to the role that would later become known as Poet Laureate of the United States, and in 1980 he was named Poet Laureate of Oregon.

Maybe someone comes to the door and says,
"Repent," and you say, "Come on in," and it's
Jesus. That's when all you ever did, or said,
or even thought, suddenly wakes up again and
sings out, "I'm still here," and you know it's true.
You just shiver alive and are left standing
there suddenly brought to account: saved.

Except, maybe that someone says, "I've got a deal
for you." And you listen, because that's how
you're trained—they told you, "Always hear both sides."
So then the slick voice can sell you anything, even
Hell, which is what you're getting by listening.
Well, what should you do? I'd say always go to
the door, yes, but keep the screen locked. Then,
while you hold the Bible in one hand, lean forward
and say carefully, "Jesus?"