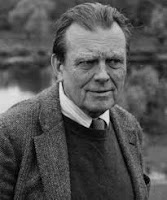 Czeslaw Milosz (1911—2004) is a Polish poet who during WWII participated in the underground resistance in Warsaw against both the Nazis and the Soviets, writing and editing books. His faith was severely challenged in the face of all the horrors he witnessed, and yet remained strong. Once he'd escaped from the oppressive communist regime that gripped his homeland, he lived in the United States from 1960 until his death; he continued to write in Polish, and then participated in its translation into English. He received the Nobel Prize for literature in 1980.

Joseph Brodsky wrote, "I have no hesitation whatsoever in stating that Czeslaw Milosz is one of the greatest poets of our time, perhaps the greatest." The following poem is from Second Space — the last book he published before his death.

Hear me, Lord, for I am a sinner, which means I have nothing except
prayer.

Protect me from the day of dryness and impotence.

When neither a swallow’s flight nor peonies, daffodils and irises
in the flower market are a sign of Your glory.

When I will be surrounded by scoffers and unable, against their
arguments, to remember any miracle of Yours.

When I will seem to myself an impostor and swindler because I take
part in religious rites.

When I will accuse You of establishing the universal law of death.

When I am ready at last to bow down to nothingness and call life
on earth a devil’s vaudeville.