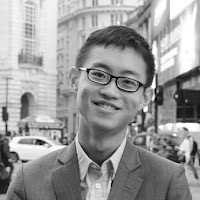 Theophilus Kwek is a poet from Singapore who is currently a student at Merton College, Oxford, and served as the President of the Oxford University Poetry Society. Despite his youth, he has published three collections. The first two are: They Speak Only Our Mother Tongue (2011) and Circle Line (2013). He won the Martin Starkie Prize for poetry in 2014, and the Jane Martin Poetry Prize in 2015 from Girton College in Cambridge.

Many of the Bible stories he regularly heard as a child have found their way into his poetry. Kwek has participated in readings with other Christian poets in Singapore. His third book Giving Ground (2016) has just appeared from Ethos Books (Singapore). He also won the New Poets' Prize in 2016. This post was suggested to me by Singapore poet Aaron Lee.

For days afterwards late Spring took its course.
A north wind came through the window-slats
and plovers returned to walk on water.
In the shorter shadows the city’s groves
filled out with leaves, promised black olives
as clouds wept and bowed over the temple.
We broke bread on the roof. Said fumbling prayers
to keep the hours, returned to usual squares,
gathered each evening in our knit circles.
It was all we could do to live, despite
the wanting the waiting or the altered light
of that once-opened sky, blue as a miracle.
In time we grew acquainted with the weight
of wonder, thought less of the mystery of things,
thought them more believable. Some went back
to Galilee. Others made for other seas,
nets and fresh tackle. I watched them leave,
then stood alone in the tug of wild hyssop
at the city’s sleeve, strong as love or the facts
of being known: brief night, the lightness of stone.