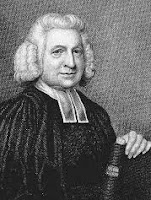 Charles Wesley (1707–1788) together with his brother John, were central figures in the Methodist movement, which spread throughout Britain and led to the Great Awakening in America. Charles was the most famous hymn writer of his day, and considered by many to be the greatest of all English hymn writers. Originally the movement was intended to bring revival to the Church of England, but the Methodists were not accepted and forced to begin a separate church. Charles, however, remained in the Church of England throughout his life.

He was such a prolific writer that he composed 6,500 hymns — which would be equivalent to writing more than two hymns a week for fifty years! It is said that Charles Wesley’s writing was deeply influenced by such poets as: Shakespeare, Herbert, Milton, and Dryden. Some of Wesley’s most famous hymns — which are sung widely in various denominations — include: “And Can It Be”, “O, For a Thousand Tongues to Sing”, “Love Divine, All Loves Excelling”, Christ the Lord is Risen Today”, the Christmas carol “Hark, the Herald Angels Sing”, and the following Advent hymn:

Come, Thou long expected Jesus
Born to set Thy people free;
From our fears and sins release us,
Let us find our rest in Thee.
Israel’s Strength and Consolation,
Hope of all the earth Thou art;
Dear Desire of every nation,
Joy of every longing heart.

Born Thy people to deliver,
Born a child and yet a King,
Born to reign in us forever,
Now Thy gracious kingdom bring.
By Thine own eternal Spirit
Rule in all our hearts alone;
By Thine all sufficient merit,
Raise us to Thy glorious throne.