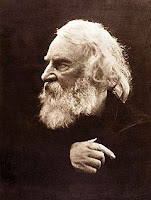 Henry Wadsworth Longfellow (1807–1882) was the most popular American poet of his time. He wrote extensive stories in verse form, such as Evangeline and The Song of Hiawatha, as well as shorter poems. To some he may be best known for his poem “Paul Revere’s Ride”, and to others for “I Heard The Bells On Christmas Day” which has become a popular Christmas carol.

He is considered to be one of the Fireside poets — which include William Cullen Bryant and Oliver Wendell Homes — who were the first American poets whose popularity could rival that of the British.

Longfellow not only wrote his own poetry, but translated poetry from such languages as Spanish, French, German, Danish, and Swedish, and was the first American to translate The Divine Comedy of Dante Alighieri.

I like that ancient Saxon phrase, which calls
The burial-ground God's-Acre! It is just;
It consecrates each grave within its walls,
And breathes a benison o'er the sleeping dust.

God's-Acre! Yes, that blessed name imparts
Comfort to those, who in the grave have sown
The seed that they had garnered in their hearts,
Their bread of life, alas! no more their own.

Into its furrows shall we all be cast,
In the sure faith, that we shall rise again
At the great harvest, when the archangel's blast
Shall winnow, like a fan, the chaff and grain.

Then shall the good stand in immortal bloom,
In the fair gardens of that second birth;
And each bright blossom mingle its perfume
With that of flowers, which never bloomed on earth.

With thy rude ploughshare, Death, turn up the sod,
And spread the furrow for the seed we sow;
This is the field and Acre of our God,
This is the place where human harvests grow!