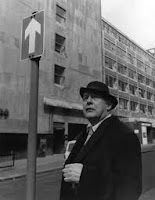 Sir John Betjeman (1906—1984) was more popular with the British public than he ever was with the literary establishment. His verse did not share the modernist characteristics of his peers, but reflected the techniques of earlier times. He received a CBE (Commander of the Order of the British Empire) in 1969. He was also appointed Britain’s Poet Laureate in 1972 — a post he held until his death.

As a boy he attended Highgate School in London, where he was taught by T.S. Eliot. His school career was less than impressive, though. At Magdalen College, Oxford, his tutor C.S. Lewis thought of him as an "idle prig” who spent his time socializing rather than doing his work; Betjeman ended up leaving Oxford without a degree. Even so, he managed to gain the attention of Louis MacNeice and W.H. Auden, who both influenced his work.

Over time, Betjeman became committed to the Anglican church and Christian faith. He said: "...my view of the world is that man is born to fulfil the purposes of his Creator i.e. to Praise his Creator, to stand in awe of Him and to dread Him. In this way I differ from most modern poets, who are agnostics and have an idea that Man is the centre of the Universe or is a helpless bubble blown about by uncontrolled forces."

His poetry often has a satirical tone, and is characterized by references to English localities and particularities of culture that are already becoming dated. Betjeman was public about his faith, although he readily admitted his doubts, as in the following poem.

The Conversion of St. Paul

What is conversion? Not at all
For me the experience of St Paul,
No blinding light, a fitful glow
Is all the light of faith I know
Which sometimes goes completely out
And leaves me plunging into doubt
Until I will myself to go
And worship in God's house below —
My parish church — and even there
I find distractions everywhere.

What is Conversion? Turning round
To gaze upon a love profound.
For some of us see Jesus plain
And never once look back again,
And some of us have seen and known
And turned and gone away alone,
But most of us turn slow to see
The figure hanging on a tree
And stumble on and blindly grope
Upheld by intermittent hope.
God grant before we die we all
May see the light as did St Paul.