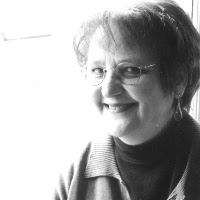 Although Jill Peláez Baumgaertner was born in the United States, her family connection with Cuba is significant. This becomes clear in her poetry — particularly in her 2001 book Finding Cuba. Her most recent poetry release is a chapbook from Finishing Line Press — My Father’s Bones (2006).

Jill Peláez Baumgaertner has been on the faculty of Wheaton College since 1980, where she is an English Professor and Dean. She has served (previously) as Poetry Editor for First Things, and (presently) for The Christian Century. She has also written a textbook/anthology, Poetry (Harcourt Brace, 1990); and Flannery O'Connor: A Proper Scaring (Cornerstone Press, 1988). Forthcoming is the anthology Imago Dei: Poems From Christianity and Literature which she has edited, and includes my own poem: “The Sacrifice Of Isaac”.

When asked about her interest in Flannery O’Connor, Jill replied, she “has a lot in common with John Donne, the subject of my dissertation. They both understand that the cross is the center of our faith—that one cannot skip over Good Friday on the way to Easter morning...”

Weightless as a float into the drift of water, one whose sin is
-----forgiven.
The Far Country a memory of fists and sour apples.

Of that old, heavy plunge through snowfall, frozen, refrozen.
The tug of gravity, slow and silent.

Of no words forming on dry lips, of breath aching to a full
-----inhale and then a letting go.
Of not yet. Not yet. And the longing for release.

The hold of grimy pleasures like a small mouth forming very
-----small o’s,
Like spaces as vast as the tundra with no human voice or as
-----tight as a wound spool.

The wasting disease of sin, God’s serious hand of judgment.
Then his gentle push: the swing into the spring air, back
-----and forth.

And then the breathing, unboxed. And later the fingers spread
wide in the grass, each particular blade a tickle.

The Father runs into the road, his embrace a chunk of earth to
-----the unmoored.
The twisted eyebeams, the Father’s gaze into his son’s tentative
-----face.

Pupils black with light peering into the lens of revelation,
-----crystalline.
Now comes the filling in of hunger, the bread hunks spilling
-----crumbs.

The wine meant for throats dry with salt and dust.
Here is God, his strokes on our dead flesh

Filling capillaries, sparking nerves. We are fed with the crusts
And blood of forgiveness, with the thrill of its gentle float,
-----its ripe music.