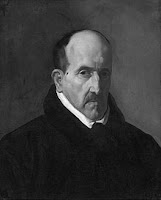 Luis de Góngora (1561—1627) is a Spanish poet — one of the most influential of his day, and one of the most prominent of all time. His major long poem The Solitudes has been translated for a new bilingual edition by Edith Grossman (2012, Penguin).

In seventeenth century Spain, two contrasting literary styles were competing for prominence. One, championed by Góngora, was beautifully ornate and obscure. The other, as practiced by his rival Francisco de Quevedo, featured simple vocabulary and compact language. The feud became personal, with both writing sarcastic pieces mocking each other. The heated enmity culminated with Quevedo actually purchasing the house where Góngora was living for the express purpose of evicting him. In 1626 Góngora contracted an illness which undermined his memory, and forced him to return to his hometown of Córdoba. He died in poverty the following year.

In the 1800s Góngora’s poetry fell out of style, but a later resurgence of interest has caused his work to become a major influence on most twentieth century Spanish-speaking poets. The following poem, translated here by John Dent-Young, was written in the year 1600.

Soneto 21 [Hung from the Cross]

On the Nativity of Christ our Lord

Hung from the Cross, pierced by a lance in the side,
both temples punctured with a crown of thorns,
to offer such mortal suffering in exchange
for our salvation, that was indeed a deed;

yet greater still to be born in want, as proof
how far for us you'll stoop, how far you'll travel,
born where there's no lodging but a stable,
where a simple porch must serve, without a roof.

It was not the greater deed, O my great Lord,
to overcome time's brutal, chill offensive,
opposing it in weakness with a strong breast

(as to sweat blood is more than suffering cold),
because there is a distance more immense
between God and man than between man and death.