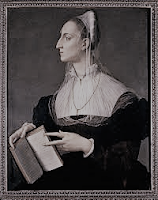 Laura Battiferri (1523—1589) is an Italian poet of the Renaissance. Her two published books are The First Book of Tuscan Works (1560), and The Seven Penitential Psalms…with Some Spiritual Sonnets (1564). When her young husband, who was a court organist, died, she expressed her sorrow through her poetry. In 1550 she married, the sculptor, Bartolomeo Ammannati — whom she was married to for the rest of her life.

In Rome, Bartolomeo worked closely with Michelangelo and Giorgio Vasari. When she and her husband moved to Florence, Battiferri considered it to be an uncultured backwater, and thought her poetry would not have the opportunities she had experienced in Rome. She soon, however, found her place in Florence, gaining great popularity. She and her husband also became great financial supporters of the Jesuits.

The following poem, was translated into English by Victoria Kirkham, and is from Battiferri’s third collection, Rime, which was incomplete at the time of her death.

Behold , Lord — and high time it is by now — I
Address to you my altered style; disdain it not, if
Ever there reached your ears a humble prayer;
Devout and pious.
How much before, alas, I sought in vain to
Make myself like the best, but only with an outer
Resemblance; as much as I esteemed earthly and
Base reward, so much I disdained the heavenly and you, my God.
Behold, Lord above, now that your pity has
Awakened this soul to its greater need, whence it
Openly sees its fault,
Repentant it prays ever for your mercy, since
With long sorrow it is manifest that whatever
Pleases in the world is a brief dream.