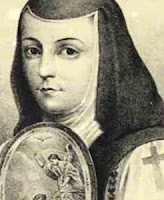 Juana Inés de la Cruz — in English, Joan Agnes of the Cross — (1648—1695) is a Mexican Heironymite nun. She was largely self-taught in childhood — secretly reading volumes from her grandfather’s library, which was forbidden for girls to do. She became accomplished in such areas as science, philosophy, languages, music and poetry.

Her most-significant pieces are The Divine Narcissus and First Dream. She was influenced by the poet Luis de Góngora.

After joining the nunnery in 1667, she began writing poetry and prose pieces concerning love, faith and feminism. She was often criticized by Catholic leaders who thought a woman should be devoting herself to prayer rather than writing. She argued that it would be better to have women teaching women (as encouraged in 1 Timothy 5). In 1693 she seems to have stopped writing, which was probably due to pressure from church authorities.

While caring for those who were ill with the plague, she herself grew ill and died.

The following is from The Divine Narcissus. Here it is Narcissus (that is Christ), appearing as the Good Shepherd, who is speaking.

-----Poor little lost sheep,
forgetful of you Master,
where can you be straying?
When you depart from me,
it’s life you leave behind, will you not see?
-----Drinking stagnant waters
out of ancient cisterns,
you slake your foolish thirst,
while, deaf to you mistake,
the spring of living waters, you forsake.
-----Call to mind my favors:
you’ll see how lovingly
I watch over you
to free you of offense,
laying down my life in your defense.
-----Covered with frost and snow,
I leave the flock behind,
to follow your foolish steps;
still you spurn this love of mine,
though for you I’ve left the other ninety-nine.
-----Consider that my beauty,
beloved of every creature,
desired by them all—
by every single one—
has set its heart on winning you alone.
-----Down paths through briary wastes,
I follow where you’ve trod,
I brave these rugged woods
until my feet are torn,
are stabbed and pierced by every passing thorn.
-----Still, I shall seek you out
and, even if in the search
I risk my very life,
yours I shall not disown:
to find you I would sooner lose my own.