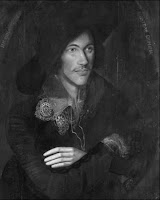 John Donne (1572―1631) is renowned as the preeminent metaphysical poet of his time. During his lifetime he was better known as a preacher ― elected as dean of St. Paul’s Cathedral in London in 1621.

His poetry was influential upon English poets of his day, and for about thirty years after his death, but it fell out of favour for most of the eighteenth and nineteenth centuries. It was little read until championed by such modernist poets as W.B. Yeats and T.S. Eliot.

Rather than writing his poems for publication, Donne released his poems by sharing them in manuscript form, from which they were often copied by his admirers. Before his death, he had only authorized the publication of two of his poems, although two years after his death the first printed edition of his poetry appeared.

Most of his poems were written before he overcame his feelings of unworthiness enough to become an Anglican cleric. In his latter years he focussed on his prose writing, including Devotions upon Emergent Occasions which were published in 1624, and on writing his sermons. When Donne’s Sermons: Selected Passages, were published in 1919, they were praised in the secular literary world as “the very genius of oratory... [and] a masterpiece of English prose.”

The following poem is from his Holy Sonnets.

Death, be not proud, though some have called thee
Mighty and dreadful, for thou art not so;
For those, whom thou think’st thou dost overthrow,
Die not, poor Death, nor yet canst thou kill me.
From rest and sleep, which but thy picture be,
Much pleasure, then from thee much more must flow,
And soonest our best men with thee do go,
Rest of their bones, and soul’s delivery.
Thou’rt slave to Fate, chance, kings, and desperate men,
And dost with poison, war, and sickness dwell,
And poppy, or charms can make us sleep as well,
And better than thy stroke; why swell’st thou then?
One short sleep past, we wake eternally,
And Death shall be no more; Death, thou shalt die.