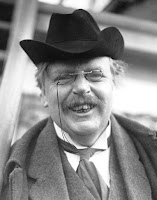 G.K. Chesterton (1874—1936) is an important Christian intellectual, known for his fiction including The Man Who Was Thursday (1908), and his popular mystery stories featuring Father Brown (a character misappropriated by a recent TV series) which were published between 1910 and 1936.

He is the author of more than eighty books, including poetry, plays, novels, short stories, essays, theology, and apologetics. He was also a newspaper columnist, and a radio personality on the BBC.

In the dark of this cloud-laden even
Still upraised, son of man, still alone
Yea, 'mid empires still shifting and breaking
This place is thine own.

All thrones are left fallen and naked
All treasures corrupt and all gains
O Prince of four nails and a gibbet
Thy Kingdom remains.

On an age full of noises and systems
Where comfortless craze follows craze
Where the passions are classified forces
Where man is a phrase.

On an age where the talkers are loudest
From thy silence, thy torment, thy power
O splendour of wrath and of pity
Look down for an hour.

Go hence: To your isles of the blessèd
Go hence, with the songs that you sing:
For this is the kingdom of pity
And Christ is the king.