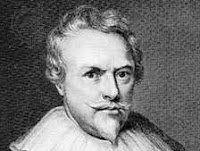 John Taylor (1578―1653) is an English poet who spent much of his life as a Thames waterman ― that is, someone who taxied people back and forth across the river in London when London Bridge was the only other way to get across. In this role he would have had interactions with London literary society, ferrying patrons, actors, and playwrights across the Thames to the Bankside theatres.

He creatively embarked on risky ventures for the sake of publication, such as travelling to Scotland without any money in 1618 for Pennylesse Pilgrimage, or travelling down the Thames in a paper boat. He has been described as “a cavalier and staunch Anglican with a puritanical taste for sermons…” He also wrote official reports in his role as clerk in the guild of Thames boatmen. Much is known about this side of working class London only because Taylor wrote about it.

Because he was self-educated Taylor had trouble being accepted by the literary elite. Even so, he wrote extensively, often having his work published for subscribers who contributed in advance. He gave himself the title “The Water Poet” as he carved out a niche for himself. Not only as a waterman, but figuratively speaking as a writer, he crossed back and forth from one side of London society to the other.

His poems and pamphlets were collected and published in 1630 as All the Workes of John Taylor the Water Poet. He is buried at the church of St Martin-in-the-Fields.

(In Taylor’s poem, below, he shares a mis-reading of the biblical account of Babel common in his day and ― in the section following what I’ve included ― a, perhaps deliberate, misunderstanding of which languages existed in ancient times.)

from 'The Several Sieges, Assaults, Sackings, And Final Destruction Of The Famous, Ancient, And Memorable City Of Jerusalem.'

The Justice, Mercy, and the Might, I sing,
Of heaven’s just, merciful, Almighty King;
By whose fore-knowledge all things were elected,
Whose power hath all things made & al protected,
Whose mercies' flood hath quenched his justice flame,
Who was, is, shall be one, and still the same
Who in the prime, when all things first began,
Made all for man, and for himself made man,
Made, not begotten, or of humane birth,
No sire but God, no mother but the earth;
Who ne'r knew childhood, or the sucking teat,
But at the first was made man complete;
Whose inward soul in God-like form did shine,
As image of the Majesty Divine;
Whose supernatural wisdom (beyond nature)
Did name each sensible and senseless creature,
And from whose star-like, sand-like generation
Sprung every kindred, kingdom, tribe, and nation.
All people then one language spake alone,
Interpreters the world then needed none;
There lived then no learned deep grammarians,
There were no Turks, no Scythians, no Tartarians
Then all was one, and one was only all
The language of the universal ball.
Then if a traveller had gone as far
As from the Arctic to th' Antarctic star,
If he from Boreas unto Auster went,
Or from the Orient to th' Occident,
Which way soever he did turn or wind,
He had been sure his country-man to find.
One hundred thirty winters since the flood
The earth one only language understood;
Until the son of Cush, the son of Cham,
A proud, cloud-scaling tower began to frame,
Trusting that if the world again were drowned,
He in his lofty building might rest sound;
All future floods he purposed to prevent,
Aspiring to heaven’s glorious battlement.
But high Jehovah with a puff was able
To make ambitious Babel but a bable,
(For what is man, that he should dare resist
The great Almighty's power, who in his fist
Doth gripe eternity, and, when he please,
Can make and unmake heaven and earth & seas?)
For in their expectation of conclusion
He plagued them all with sundry tongues' confusion.
Such gibberish, gibble-gabble, all did jangle,
Some laugh, some fret, all prate, all different wrangle…