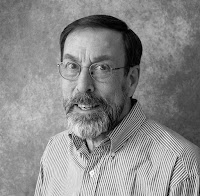 David E. Poston is a poet living in North Carolina who has published two chapbooks ― My Father Reading Greek (1999) and Postmodern Bourgeois Poetaster Blues (2007) ― and the full-length collection Slow of Study (2015, Main Street Rag). He taught for thirty years in public school, at the University of North Carolina at Charlotte, and at Charlotte’s Young Writers’ Workshop.

His poetry has appeared at Your Daily Poem. David is a book reviewer for Pedestal Magazine and is one of the core editors of Kakalak ― an anthology which began as a regional publication but has grown well beyond that.

The following poem first appeared in The Windhover.

As the Ethiopian struggles
to parse the words of Isaiah,
help comes from a stranger
with a tongue of fire.

Empires come and go.
One persecutes believers,
another provides the Middle Passage—
that’s not Philip’s news.

There it will not be harps
hanging from the trees.

Here is water, the eunuch says.
Baptize me.
So the journey begins.