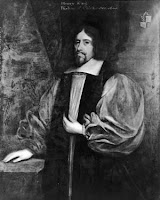 Henry King (1592―1669) is one of the poets T.S. Eliot identified as among the metaphysical poets, calling him familiarly Bishop King. King became Bishop of Chichester in 1642, but had his living, his library, and the rectory taken from him by the Parliamentary forces who had ceased power. He was reinstated at Charles II’s restoration in 1660.

Henry King’s father was the influential John King, Bishop of London who died in 1621. Rumours circulated at that time of a deathbed conversion to Catholicism, which Henry refuted in a sermon.

Henry King was friends with such poets as Ben Jonson, Izaak Walton, and John Donne ― eventually serving as Donne’s literary executor. King is primarily known today for “The Exequy,” an elegy written at the death of his first wife in 1624.

A poetry collection Poems, Elegies, Paradoxes, and Sonets, appeared under his name in 1657, although not prepared by him, and containing some poems that are not his. A selection entitled Poems and Psalms was published in 1843. His body is buried in Chichester Cathedral.

Hearken O God unto a Wretches cries
Who low dejected at thy footstool lies.
Let not the clamour of my heinous sin
Drown my requests, which strive to enter in
At those bright gates, which always open stand
To such as beg remission at thy hand.
Too well I know, if thou in rigour deal
I can not pardon ask, nor yet appeal:
To my hoarse voice, heaven will no audience grant,
But deaf as brass, and hard as adamant
Beat back my words; therefore I bring to thee
A gracious Advocate to plead for me.
What though my leprous soul no Jordan can
Recure, nor floods of the lav'd Ocean
Make clean? yet from my Saviours bleeding side
Two large and medicinable rivers glide.
Lord, wash me where those streams of life abound,
And new Bethesdas flow from every wound.
If I this precious Lather may obtain,
I shall not then despair for any stain;
I need no Gileads balm, nor oil, nor shall
I for the purifying Hyssop call:
My spots will vanish in His purple flood,
And Crimson there turn white, though washed with blood.
See Lord! with broken heart and bended knee,
How I address my humble suit to Thee;
O give that suit admittance to thy ears
Which floats to thee not in my words but tears:
And let my sinful soul this mercy crave
Before I fall into the silent grave.