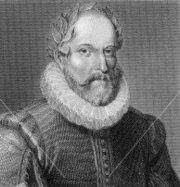 Joshua Sylvester (1563―1618) is best known for his popular translation of the creation epic Divine Weekes and Workes by the French Huguenot poet Guillaume de Salluste du Bartas. This book influenced many English poets, including John Milton.

This was an ambitious project to undertake, considering that Sylvester ― the son of a clothier in Kent ― had to dedicate his time to trade; he was highly involved with The Company of Merchant Adventurers of London, exporting cloth around the world.

Even though his poetic output was small, he was a popular poet of his day. He received a part-time pension as a poet at the court of Henry Frederick, the Prince of Wales around 1606.The Sacred Workes of that Famous Poet Silvester: Gathered into one volume was published in London in 1620.

Unmoved, Thou movest the World about;
Unplacated, Within it, or Without:
Unchanged, timeless, Time Thou changest:
The unstable, Thou, still stable, rangest;
No outward Force, nor inward Fate,
Can Thy dread Essence alterate:

Thou, Father, madest this mighty Ball;
Of nothing thou createdest All,
After the Idea of thy Mind,
Conferring Form to every kind.

Thou wert, Thou art, Thou wilt be ever:
And Thine Elect, rejectest never.