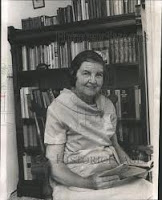 Edith Lovejoy Pierce (1904―1983) is an English poet who, as a newlywed, moved to Illinois with her American husband in 1929. She is the author of several poetry collections including In This Our Day (1944), Therefore Choose Life (1947, Harper & Brothers), and White Wake in the Sea (1966). She also translated the prayer book With the Master: A Book of Meditations (1943) by Philippe Vernier.

The quote that predominantly comes up next to her name on the internet is “We will open the book. Its pages are blank. We are going to put words on them ourselves. The book is called Opportunity and its first chapter is New Year's Day.” Pierce is also known for her pacifism.

The following poem first appeared in the September 1945 issue of Poetry, and is from Therefore Choose Life.

The Tongue of the Snake

Then spoke with the tongue of the snake
A voice from the camouflage tree:
"Remember the likeness of me?
Remember the story I told?
The first word to worship is 'take,'
The next to bow down to is 'hold."'

Like the purr of a soothing refrain:
"The fairest of all words is 'eat.'"
The eyes were the color of meat.
Sliding heavy as liquified lead,
It had wheels within wheels for a brain,
And it hissed: "There is fruit overhead."

"The apples are bitter and hot."
Its scales had the rattle of steel.
"The apples are ripe for a meal."
Its stripes were as vivid as flak.
"They either explode or they rot
Explode when they drop in your track."

It straightened itself like a rod
Then plunged like a piston to earth.
"The apples are golden in worth,
And no one can taste them in vain.
If you want to be knowing as God,
The apples are worth all the pain."

Its scales had the thunder of drums.
"What matter the blood and the sweat?
What mater the sword at the gate?"
Hypnotic its eye, as a gem.
"If you want to throw God when he comes,
The apples are ripe on the stem."

Its length like a languor of oil
Slid back to the camouflage tree.
"Remember the likeness of me?"
The dollar leaves rustled in dread.
"Take care that the apples don't spoil.
Beware! There is fruit overhead."