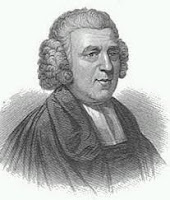 John Newton (1725—1807) is the English writer best known as the author of the hymn “Amazing Grace”. When he was only eleven, he went on his first of five Mediterranean voyages with his father, which led to his career as a sailor. Eventually Newton became the captain of a slave ship. Years later, after his conversion to Christian faith, he became an important voice promoting the abolition of slavery; he also became a minister in the Church of England.

In 1779 a book Olney Hymns anonymously first appeared; 280 of the book’s hymns were written by John Newton, and the other 68 by his friend William Cowper. Together, in the small hamlet of Olney, they were a great encouragement to the congregation, which grew substantially. This was the first publication for many great hymns of the Christian faith.

The 2007 movie Amazing Grace, tells the story of British Member of Parliament William Wilberforce and his political battle to end black slavery. The evangelicals of England were very active in this push for change. John Newton (played by Albert Finney) is shown as a significant influence upon Wilberforce. In 1807, the year of Newton’s death, The Slave Trade Act abolished slavery in the British Empire.

Why should I fear the darkest hour

Why should I fear the darkest hour,
Or tremble at the tempter's power?
Jesus vouchsafes to be my tower.

Though hot the fight, why quit the field?
Why must I either fly or yield,
Since Jesus is my mighty shield?

When creature comforts fade and die,
Worldlings may weep, but why should I?
Jesus still lives, and still is nigh.

Though all the flocks and herds were dead,
My soul a famine need not dread,
For Jesus is my living bread.

I know not what may soon betide,
Or how my wants shall be supplied;
But Jesus knows, and will provide.

Though sin would fill me with distress,
The throne of grace I dare address,
For Jesus is my righteousness.

Though faint my prayers and cold my love,
My steadfast hope shall not remove,
While Jesus intercedes above.

Against me earth and hell combine;
But on my side is power divine;
Jesus is all, and He is mine!