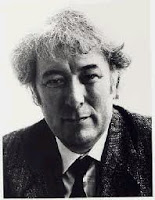 Nobel Prize winning, Irish poet Seamus Heaney has recently — once again — proved his worth with the publication of his latest book: Human Chain (2010). In this, his twelfth collection, readers might feel they are reading someone else’s mail, for Heaney doesn’t explain references. There are plenty of localisms (places, particulars of farm life, and specific neighbours), Latin words or Gaelic phrases, classical references — especially to Virgil — and allusions to saints and Irish history — from the spread of Christianity down to “The Troubles”. Even so, pieces begin to come together, as we dwell within his work.

In particular we often encounter the sixth century saint and scholar Columba of Iona (or Colmcille) — who founded a monastery at Derry, where Heaney is from. The poet relates to Columba’s bookish calling of pen and ink.

To Heaney, the everyday lives of people are sacred. His own schooldays appear, disguised within “Hermit Songs” as he writes both of medieval scribes, and of his teacher’s supplies of “nibs in packets by the gross, / Powdered ink, bunched cedar pencils, / Jotters, exercise books, rulers...” In “Chanson d’Aventure” he takes us along on a wild ambulance ride, under the control of “The charioteer at Delphi”.

Mostly, Seamus Heaney is a poet of memory. He preserves sounds and feelings — such as “the clunk of the baler / Ongoing, cardiac-dull” — or the wind “that rose and whirled until the roof / Pattered with quick leaves off the sycamore” — or the “chunk and clink of an alms-collecting mite-box” — or the particulars of his new “Guttery, snottery” pen in its “first deep snorkel / In a newly opened ink-bottle”.

The following poem is from Human Chain.

Their shoulders numb, the ache and stoop deeplocked
In their backs, the stretcher handles
Slippery with sweat. And no let-up

Until he’s strapped on tight, made tiltable
And raised to the tiled roof, then lowered for healing.
Be mindful of them as they stand and wait

For the burn of the paid-out ropes to cool,
Their slight lightheadedness and incredulity
To pass, those ones who had known him all along.