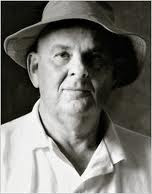 Les Murray is Australia’s best known contemporary poet. He has published dozens of books, and won the T.S. Eliot Award (1996), the Queens Gold Medal For Poetry (1999), and other honours. He consistently dedicates the poems in his books to the glory of God. He has worked as an editor with Poetry Australia and Quadrant and edited The Anthology of Australian Religious Poetry. His most recent collection is Taller When Prone (2010).

Murray is critical of his Calvinist upbringing — particularly how the doctrine of predestination, as it was used, caused many to look down upon poor families, such as his own, as being disfavoured by God. He explained when interviewed for Image, he converted to Catholicism as a teen in 1962, “fascinated by the sacramental bridge between earth and heaven that Catholicism offered”.

Of other Australian Christian poets he has noted James McAuley and Andrew Lansdown as among the best.

The following poem may have been inspired by Thomas Gray’s 1751 poem “Elegy Written in a Country Churchyard” in that the poet wonders about how history may have unfolded differently given different circumstances. The AIF, mentioned below is the Australian Imperial Force — numbered to correspond to the two world wars.

The Chimes of Neverwhere

How many times did the Church prevent war?
Who knows? Those wars did not occur.
How many numbers don’t count before ten?
Treasures of the Devil in Neverwhere.

The neither state of Neverwhere
is hard to place as near or far
since all things that didn’t take place are there
and things that have lost the place they took:

Herr Hitler’s buildings, King James’ cigar
the happiness of Armenia
the Abelard children, the Manchu’s return
are there with the Pictish Grammar Book.

The girl who returned your dazzled look
and the mornings you might have woke to her
are your waterbed in Neverwhere.
There shine the dukes of Australia

and all the great poems that never were
quite written, and every balked invention.
There too are the Third AIF and its war
in which I and boys my age were killed

more pointlessly with each passing year.
There too half the works of sainthood are
enslavements, tortures, rapes despair
deflected by them from the actual

to beat on the human-sacrifice drum
that billions need not die to hear
since Christ's love of them struck it dumb
and his agony keeps it in Neverwhere.

How many times did the Church bring peace?
More times than it happened. Leave it back there:
the children we didn't let out of there need it,
for the Devil's at home in Neverwhere.


Entry written by D.S. Martin. He is the award-winning author of the poetry collections Poiema (Wipf & Stock) and So The Moon Would Not Be Swallowed (Rubicon Press). They are both available at: www.dsmartin.ca
Posted by D.S. Martin at 3:00 AM