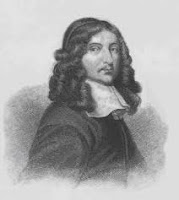 Andrew Marvell (1621—1678) was an English metaphysical poet, who was influenced by John Donne and Ben Jonson. His father was the Reverend Andrew Marvell who lectured at Holy Trinity Church in Hull, Yorkshire.

In 1653, Marvell became friends with John Milton. By 1657, Milton was able to have Marvell replace him as Latin secretary to Cromwell’s Council of State — as Milton was now blind. In 1660 — the year of the Restoration — Marvell was elected to Parliament and used his influence to free Milton from prison, perhaps even saving his life.

During his life, Marvell was better known for his political pamphlets. He was critical of the government of Charles II, particularly in its lack of religious toleration of the Puritans. Many of his politically-charged, satyrical pieces were not published under his own name — and very few of his poems were published within his lifetime.

When for the thorns with which I long, too long,
With many a piercing wound,
My Saviour's head have crowned,
I seek with garlands to redress that wrong,—
Through every garden, every mead,
I gather flowers (my fruits are only flowers),
Dismantling all the fragrant towers
That once adorned my shepherdess's head:
And now, when I have summed up all my store,
Thinking (so I my self deceive)
So rich a chaplet thence to weave
As never yet the King of Glory wore,
Alas! I find the Serpent old,
That, twining in his speckled breast,
About the flowers disguised, does fold
With wreaths of fame and interest.
Ah, foolish man, that wouldst debase with them,
And mortal glory, Heaven's diadem!
But thou who only couldst the Serpent tame,
Either his slippery knots at once untie,
And disentangle all his winding snare,
Or shatter too with him my curious frame,
And let these wither—so that he may die—
Though set with skill, and chosen out with care ;
That they, while thou on both their spoils dost tread,
May crown Thy feet, that could not crown Thy head