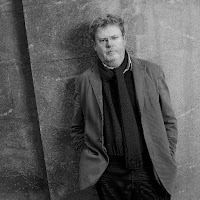 John Milbank is Director of the Centre of Theology and Philosophy at the University of Nottingham. Last summer he retired from his position as Nottingham's Research Professor of Religion, Ethics, and Politics. He has also taught at the universities of Virginia, Cambridge and Lancaster. As a student he studied under Rowan Williams.

Of his three poetry collections, The Dances of Albion (2015, Shrearsman Books) is most recent. As a poet he is more focused on British mythology and fairy tales than theology.

He is, however, better known as a theologian — particularly for founding the "Radical Orthodoxy" movement — and is the author of several influential books including, Theology and Social Theory, and The Suspended Middle. He is sceptical of secular reason, and critical of liberalism.

Looking for rain,
celestial water
above all ponds,
the weed-lilies of convulvulus
in September foregather in the hedgerows
like white bells for a late marriage
of a still beautiful virgin,
their pure glamour disparaged,
as gypsy-women are the tares of queendom,
more savagely still in their darkness
and more blowingly resplendent
through its untamed virtue.

Returning on the train in hope
after many years
of a better consummation, he
recalled the school bell’s autumn sound
which once confirmed yet interrupted
his childhood rural pasturage.
It had reached attractively and insidiously
across all fields and past them,
suspending forever nature’s mute
untimetabled instruction.
So we probe the stars with signals,
travel anywhere in lines and pay
in numbers if we get them right
for anything available.

While nature lost still stays our course,
like a vast golden shadow of background,
ever forgotten, ever present
to accuse us of a wholly inadequate answer
to her perennial welcome.
Why do the skies alter, the seas surge and yet
the earth stays firm on which we are planted
in order to till, walk ever onwards,
look upwards that we might re-consider always?
Shifting the soils like a horde of phantoms
has got us nowhere.
Gridding the earth with waves and networks
has communicated to us nothing.

The road bends: he longs to linger
by the gate’s opening perchance
to greet her. Lone winds leave
the fascinating clouds from which
the dark birds also swarm. The willowherb
grows in this season more freely than the grasses.