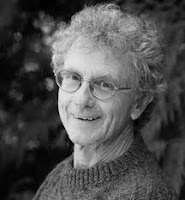 Richard Osler lives on Vancouver Island, where he facilitates weekly poetry workshops at Cedars — an addiction recovery centre. He also leads poetry writing retreats, and poetry as prayer retreats — primarily in western Canada, but recently completed a ten-day retreat in Italy. He has published several chapbooks, including Where the Water Lives (2012, Leaf Press). His first full-length poetry collection Hyaena Season was published by Quattro Books in 2016.

Before being drawn to poetry, Richard worked as a business journalist for the Financial Post. For nine years, he was a business columnist for the CBC Radio program Morningside with Peter Gzowski. Some of his nonfiction work appears in a volume of Gzowski’s Morningside Papers.

Some of Richard’s most important influences include novelist Sir Laurens van der Post — poets David Whyte, and Patrick Lane — and poetry therapist John Fox. Richard Osler is one of the poets included in my soon-to-be-released anthology Adam, Eve, & the Riders of the Apocalypse (2017, Cascade).

The copper lake, blue-green,
where the cinnamon bear lopes up the scree
stopping once to look back before its final bound
into the trees. I want the trees and what they say
back to wind, to rain and thunder. I want thunder
and lightning’s crooked light. And I want the morning,
sloe-eyed, and night stuffed back inside its purse.
I want the boat, the storm and the man in the stern
who calms it; the water before it turns to wine.
I want the late-day light, the way it streams
across the bridge suspended over the narrows
and the look of the sun-struck woman crossing over.
I want her brown eyes looking into her lover’s blue.
I want to say to Galway Kinnell what is is not enough
when what is is war or famine, the bruised child
or the wife in pajamas, after breakfast, who tells
her husband of more than twenty years:
his love
----------is not
---------------------enough.