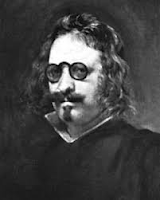 Francisco de Quevedo (1580—1645) is considered to be the master satirist of Spain’s golden age. While still a student Quevedo’s writing caught the attention of Miguel de Cervantes. As gratifying as this was, his primary interest was to gain prominence through politics. For seven years Quevedo became dedicated to the service of the Duke de Osuna, who was conspiring to seize control of Venice. When Osuna’s plan failed, the Spanish government distanced itself from him, and by extension from Quevedo. Disillusioned with politics, Quevedo turned his attention to literature.

Quevedo developed a style of poetry called conceptismo, which began with a conceit — similar to his English contemporary John Donne — that would expand into an elaborate poem-length metaphor. Quevedo’s style features condensed simple language, as opposed to the ornate style of Luis de Góngora. Unfortunately, the rivalry between the two styles became a personal battle between the two men.

Francisco de Quevedo is known for the novel The Life Story of the Sharper, called Don Pablos — a precursor to the satirical novels of the eighteenth and nineteenth centuries.

The following was translated by Michael Smith

from On The Anvil – LVII

Adam in Eden, You in a garden;
He in all honour, You in your agony;
He sleeps and his company ill-watches;
You pray wide awake as yours slumbers.

His act was the first of disharmonies;
You composed our primordial day;
You drink the cup your Father sends;
He eats defiance and lives as dead.

The sweat of his brow is his sustenance;
That of yours is our glory:
The guilt was his, the affront yours.

He bequeathed horror; You leave us a memory;
His, a blind deceit; yours, a prime bargain.
How different the story you leave us!