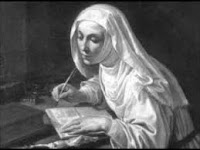 Born Caterina Benincasa, the 23rd of 25 children, she claimed to have seen a vision of Jesus, when she was just seven and told her parents she would dedicate herself to a religious life. At fifteen she cut off her hair to scuttle their plan to have her married. She was a mystic, and an ascetic who served the poor and sick.

In 1374, when most residents fled the Black Death, she and her followers remained in Siena to nurse the sick and bury the dead. Once the pandemic waned, because she was distressed by corruption in the church, Catherine visited Pope Gregory XI in Avignon, France. She believed this exile was part of the problem, and in 1377 he followed her advice and returned to Rome.

All has been consecrated.
The creatures in the forest know this,
The earth does, the seas do, the clouds know
as does the heart full of love.

Strange a priest would rob us of this knowledge
and then empower himself with the ability
to make holy
what already was.