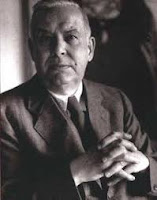 Wallace Stevens (1879―1955) perhaps has no business being mentioned in a blog about Christian poetry. He grew up in a home from which the children were sent to schools connected with local Presbyterian and Lutheran churches, and in which his mother read a chapter every evening to them from the Bible. When he attended Harvard as a young man, he became an outspoken skeptic.

He was prone to depression, and became an insurance executive in Hartford, Connecticut ― busying himself with a drudgery that gave him stability, but interfered with his literary output. Stevens’ first book Harmonium (1923) contains most of his frequently-anthologized poems. His second book Ideas of Order appeared thirteen years later.

Biographer Paul Mariani sees evidence of a religious turn occurring in Stevens’ latter poems, which suggest the poet was becoming skeptical of his own skepticism.

Final Soliloquy of the Interior Paramour

Light the first light of evening, as in a room
In which we rest and, for small reason, think
The world imagined is the ultimate good.

This is, therefore, the intensest rendezvous.
It is in that thought that we collect ourselves,
Out of all the indifferences, into one thing:

Within a single thing, a single shawl
Wrapped tightly round us, since we are poor, a warmth,
A light, a power, the miraculous influence.

Here, now, we forget each other and ourselves.
We feel the obscurity of an order, a whole,
A knowledge, that which arranged the rendezvous.

Within its vital boundary, in the mind.
We say God and the imagination are one...
How high that highest candle lights the dark.

Out of this same light, out of the central mind,
We make a dwelling in the evening air,
In which being there together is enough.