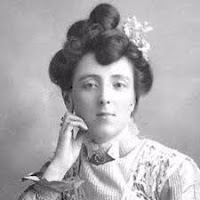 Lucy Maud Montgomery (1874―1942) is a Canadian author, particularly famous for her 1908 novel Anne of Green Gables, and its sequels. Much of her fiction is set in Prince Edward Island ― which has become a significant focus for the island’s tourism. She went on to publish 20 novels, hundreds of short stories, and more than 500 poems. As is often the case, as her fiction increased in popularity, her poetry writing decreased.

As a poet she was greatly influenced by the Romantics, and Lord Tennyson. Her most ambitious poem “The Watchman” is a dramatic monologue reminiscent of Robert Browning, which tells the story of a Roman soldier, Maximus, who witnessed the resurrection of Christ.

The following poem first appeared in The Christian Advocate on October 1st 1908, and is from The Watchman and Other Poems (1916). John Ferns, an English professor at McMaster University, wrote in 1986 about this poem, “Perhaps it is the Biblical subject of drought or the Christian idea of rebirth that provokes the increasing use of religious language as the poem proceeds.”

Last night all through the darkling hours we heard
The voices of the rain,
And every languid pulse in nature stirred
Responsive to the strain;
The morning brought a breath of strong sweet air
From shadowy pinelands blown,
And over field and upland everywhere
A newborn greenness shone.

The saintly meadow lilies offer up
Their white hearts to the sun,
And every wildwood blossom lifts its cup
With incense overrun;
The brood whose voice was silent yestereve
Now sings its old refrain,
And all the world is grateful to receive
The blessing of the rain.