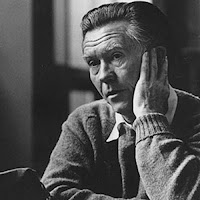 William Stafford (1914 —1993) is a prolific American poet whose first poetry collection appeared when he was 46 years old. Two years later his Traveling Through the Dark (1962) won the National Book Award. His poetry is characterized by a simple accessible style ― understated, restrained, and unforced. His work often investigates the relationship between humanity and the natural world.

He was a disciplined writer who didn’t think anyone need experience writer’s block. He said, “A writer is not so much someone who has something to say as he is someone who has found a process that will bring about new things he would not have thought of if he had not started to say them.”

He was a pacifist who was part of the small Christian denomination the Church of the Brethren. One of his collections Scripture of Leaves was published through the Brethren, and although he taught for most of his career at Lewis & Clark College in Oregon, he did teach for one year at their Indiana school, Manchester College.

You will never be alone, you hear so deep
a sound when autumn comes. Yellow
pulls across the hills and thrums,
or the silence after lightning before it says
its names― and then the clouds' wide-mouthed
apologies. You were aimed from birth:
you will never be alone. Rain
will come, a gutter filled, an Amazon,
long aisles― you never heard so deep a sound,
moss on rock, and years. You turn your head―
that's what the silence meant: you're not alone.
The whole wide world pours down.