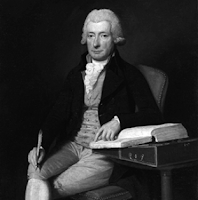 William Cowper (1731—1800) is an important English poet — considered the most-popular poet of his generation. In 1779, Cowper (pronounced Cooper) and his good friend the evangelical curate John Newton published the book Olney Hymns, which consisted primarily of Newton’s compositions, but also around 68 of Cowper’s, such as his well-known hymn, “Oh, For a Closer Walk with God.” His poetry collection Poems by William Cowper, of the Inner Temple appeared in 1782.

He suffered from mental illness throughout his adult life, which prevented him getting married on two occasions, and interfered with his being appointed to the House of Lords. In further bouts of madness and nightmares he came to believe that God had rejected him. When Mary Unwin, a widow to whom he had once been engaged, died in December 1796, Cowper sank into a despair from which he never recovered.

Thy country, Wilberforce, with just disdain,
Hears thee, by cruel men and impious, called
Fanatic, for thy zeal to loose the enthralled
From exile, public sale, and slavery's chain.
Friend of the poor, the wronged, the fetter-galled,
Fear not lest labour such as thine be vain!
Thou hast achieved a part; hast gained the ear
Of Britain's senate to thy glorious cause;
Hope smiles, joy springs, and though cold caution pause
And weave delay, the better hour is near,
That shall remunerate thy toils severe
By peace for Afric, fenced with British laws.
Enjoy what thou hast won, esteem and love
From all the just on earth, and all the blest above!