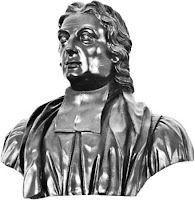 John Norris (1657―1712) is an English philosopher, theologian, and metaphysical poet. An important concern for him was to try to prove the existence and immortality of the soul ― which I suspect are outside the range of things objectively provable. He was a philosophic opponent of John Locke, however, he and Locke corresponded with each other for many years. Locke even put in a good word for Norris, which led to his rectorship at Bemerton, Wiltshire. Eventually though, the two men quarrelled and expended considerable ink in refuting one another’s views.

Many of Norris’s best-known poems appeared in A Collection of Miscellanies (1687) which includes various writings; by 1730 a ninth edition was printed. One of his most popular books Christian Blessedness was published in 1690.

During the last twenty years of his life he wrote extensively, and lived the quiet life of a country parson in Bemerton, Wiltshire ― which had been the home of George Herbert.

Hail thou most sacred venerable thing!
What Muse is worthy thee to sing?
Thee, from whose pregnant universal womb
All things, even Light thy rival, first did come.
What dares he not attempt that sings of thee,
Thou first and greatest mystery?
Who can the secrets of thy essence tell?
Thou like the light of God art inaccessible.

Before great Love this monument did raise,
This ample theatre of praise.
Before the folding circles of the sky
Were tuned by Him who is all harmony.
Before the morning stars their hymn began,
Before the council held for man.
Before the birth of either Time or Place,
Thou reign'st unquestioned monarch in the empty space.

Thy native lot thou didst to Light resign,
But still half of the globe is thine.
Here with a quiet, and yet aweful hand,
Like the best emperors thou dost command.
To thee the stars above their brightness owe,
And mortals their repose below.
To thy protection Fear and Sorrow flee,
And those that weary are of light, find rest in thee.

Tho light and glory be th' Almighty's throne,
Darkness in His pavilion.
From that His radiant beauty, but from thee
He has His terror and His majesty.
Thus when He first proclaimed His sacred Law,
And would His rebel subjects awe,
Like princes on some great solemnity,
H' appeared in's robes of State, and clad Himself with thee.

The blest above do thy sweet umbrage prize,
When cloyed with light, they veil their eyes.
The vision of the Deity is made
More sweet and beatific by thy shade.
But we poor tenants of this orb below
Don't here thy excellencies know,
Till Death our understandings does improve,
And then our wiser ghosts thy silent night-walks love.

But thee I now admire, thee would I choose
For my religion, or my Muse.
'Tis hard to tell whether thy reverend shade
Has more good votaries or poets made,
From thy dark caves were inspirations given,
And from thick groves went vows to Heaven.
Hail then thou Muse's and Devotion's spring,
'Tis just we should adore, 'tis just we should thee sing.