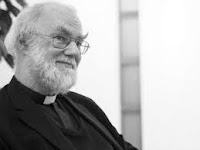 Rowan Williams is a Welsh poet who served as Archbishop of Canterbury from 2002 to 2012. Prior to this appointment he was Bishop of Monmouth and Archbishop of Wales. His earlier career was that of an academic at both Oxford and Cambridge, and subsequently he has served (until last September) as Master of Magdalene College, Cambridge.

His most-recent poetry collection is The Other Mountain (2014, Carcanet). His earlier books ― After Silent Centuries (1994) and Remembering Jerusalem (2001) ― were brought together in The Poems of Rowan Williams (2002) which also includes some newer poems. His New and Collected Poems will appear from Carcanet in November.

The Lord is Always Liminal

A book falling open, the sliced wood
peels apart, jolting for a moment
over the clenched swollen muscle:
so that, as the leaves fall flat
side by side, what we read is the two
ragged eyes each side of a mirror,
where the wrinkles stream off sideways,
trail down the cheeks, awash with tears,
mucus, mascara. Split the wood
and I am there, says the unfamiliar
Lord, there where the book opens
with the leaves nailed to the wall
and the silent knot resolved by surgery
into a mask gaping and staring, reading
and being read. Split the wood; jolt
loose the cramp, the tumour, let the makeup run,
the sap drain, the door swing in the draught.