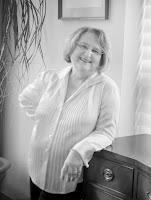 Jill Peláez Baumgaertner is an influential Christian poet. As long-serving poetry editor for The Christian Century she has given voice to many worthy poets, encouraging them, and sharing their work with us. She is also past president of the Conference on Christianity and Literature. Her first poetry collection since What Cannot Be Fixed (2014, Poiema/Cascade) arrives this month ― From Shade To Shine from Paraclete Press.

She has edited two anthologies, Imago Dei: Poetry from Christianity and Literature (2012), and the forthcoming anthology Taking Root in the Heart which draws poems from The Christian Century.

In her academic career, Baumgaertner came to the English faculty of Wheaton College, in 1980, from Valparaiso University; she later served as Wheaton’s Dean of Humanities and Theological Studies (2001―2017), and has now retired.

Both of these poems are from her new book.

The garden in the deep night
after God’s rapt silence
has no breath. No echo even
in the vacant tomb which no one
yet has visited, no one seen.
and yet everywhere his breathing,
the turn begins, the blanket
of sunrise in mist stretches
to swaddle the earth,
gouged and waiting.

In the tomb
his cheek ashens,
the silence stiffens.
When will his cells enliven,
his blood begin its orbit,
his skin pinken?
When will he flex and rise
into the dawn of new time?

He quickens, infused with tempo,
his heartbeat
breaking through the grave’s secrets
crushing the silence,
trampling death.

And he rises.
he rises indeed,
light blazing.