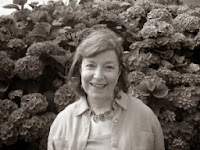 Barbara Crooker's latest poetry collection Gold (2013) is part of the Poiema Poetry Series from Cascade Books. Many journals, such as The Cresset and Green Mountains Review, and many anthologies including Good Poems for Hard Times (Viking Penguin), have published her work. She has been honoured with several awards, including the 2003 Thomas Merton Poetry of the Sacred Award, and she has been nominated thirty-two times for the Pushcart Prize.

Every year, I send out a selected poem for Advent to friends. These are among a series that Barbara Crooker sent to me, in return, last December.

These are dark times. Rumors of war
rise like smoke in the east. Drought
widens its misery. In the west, glittering towers
collapse in a pillar of ash and dust. Peace,
a small white bird, flies off in the clouds.

And this is the shortest day of the year.
Still, in almost every window,
a single candle burns,
there are tiny white lights
on evergreens and pines,
and the darkness is not complete.

In the dark divide of mid-December
when the skies are heavy, when the wind comes down
from the north, feathers of snow on its white breath,
when the days are short and the nights are cold,
we reach the solstice, nothing outside moving.
It’s hard to believe in the resurrection
of the sun, its lemony light, hard to remember
humidity, wet armpits, frizzy hair.
Though the wick burns black and the candle flickers,
love is born in the world again, in the damp
straw, in some old barn.