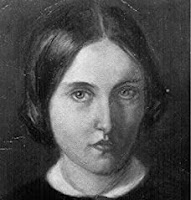 Christina Georgina Rossetti (1830—1894) is one of the Victorian era’s finest poets. Born in England, into an artistic family, the youngest daughter of an Italian refugee, poet and scholar ― she was educated at home by her mother, who cultivated intellectual and artistic excellence in her children, as well as an abiding faith.

Christina Rossetti had wanted to join the work of Florence Nightingale in the Crimean War, but instead served as a visiting parish nurse to the poor; she later volunteered a good deal of her time at the St. Mary Magdalene Penitentiary in Highgate, a charitable institution for the reclamation of fallen women.

In 1861, her brother Dante Gabriel Rossetti sent her now famous poem “Goblin Market” to the art critic John Ruskin with the hope that he would recommend it for publication. Ruskin believed the poem was “unpublishable” for reasons which now demonstrate he had misjudged both the public and the value of Christina’s originality. Despite this, her poems began to find publication, and her book Goblin Market and Other Poems was published by Macmillan in 1862, to critical acclaim.

In 1874 she began publishing her books of devotional prose, through which can be seen explicitly much of what she expressed, almost cryptically, through the concise style of her poems. In her discussions of natural and biblical images, she expounds her symbolic view of the world.

The final poetry collection Rossetti had published in her lifetime, Verses (1893), consists of 331 poems of faith.

Before The Paling Of The Stars

Before the paling of the stars,
Before the winter morn,
Before the earliest cockcrow
Jesus Christ was born:
Born in a stable,
Cradled in a manger,
In the world His hands had made
Born a stranger.

Jesus on His Mother's breast
In the stable cold,
Spotless Lamb of God was He,
Shepherd of the fold:
Let us kneel with Mary maid,
With Joseph bent and hoary,
With Saint and Angel, ox and ass,
To hail the King of Glory.