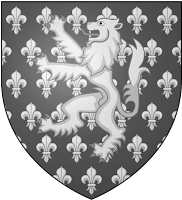 John Beaumont (1583―1627) is an English poet. He studied at Oxford, and settled at Grace-Dieu Priory in Leicestershire, England, in 1605 to manage his family’s estates after the death of his elder brother. His younger brother, Francis Beaumont, established himself as a dramatist.

One of Sir John Beaumont’s great achievements was the poem in twelve books The Crown of Thorns, which he worked on for many years, although it was never published. The poem was much admired by those who read it; the manuscript was believed to be lost, until quite recently when it was discovered in the British Library, and identified as Beaumont’s.

His other books include The Metamorphosis of Tobacco (1602), and Bosworth Field (1629). He helped establish the heroic couplet as a common form in English poetry. Through court connections he was made a baronet in January 1626.

Fair eastern star, that art ordained to run
Before the sages to the rising sun,
Here cease thy course, and wonder that the cloud
Of this poor stable can thy Maker shroud:
Ye heavenly bodies glory to be bright,
And are esteemed as ye are rich in light;
But here on earth is taught a different way,
Since under this low roof the Highest lay;
Jerusalem erects her stately towers,
Displays her windows, and adorns her bowers:
Yet there thou must not cast a trembling spark—
Let Herod’s palace still continue dark.
Each school and synagogue thy force repels,
There pride, enthroned in misty errors, dwells;
The temple where the priests maintain their quire
Shall taste no beam of thy celestial fire.
While this weak cottage all thy splendour takes,
A joyful gate of every chink it makes.
Here shines no golden roof, no ivory stair,
No king exalted in a stately chair,
Girt with attendants, or by heralds styled;
But straw and hay enwrap a speechless child.
Yet Sabæ’s lords before this babe unfold
Their treasures, offering incense, myrrh, and gold.
The crib becomes an altar; therefore dies,
Nor ox nor sheep, for in their fodder lies
The Prince of Peace, who, thankful for his bed,
Destroys those rites in which their blood was shed:
The quintessence of earth, he takes and fees,
And precious gums distilled from weeping trees;
Rich metals and sweet odours now declare
The glorious blessings which his laws prepare:
To clear us from the base and loathsome flood
Of sense, and make us fit for angels’ food;
Who lift to God for us the holy smoke
Of fervent prayers, with which we him invoke,
And try our actions in that searching fire
By which the seraphims our lips inspire.
No muddy dross pure minerals shall infect,
We shall exhale our vapours up direct:
No storms shall cross, nor glittering lights deface,
Perpetual sighs, which seek a happy place.