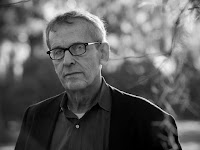 Peter Cooley is Professor of English Emeritus at Tulane University, in New Orleans, and is former Poet Laureate of Louisiana. He serves as poetry editor for Christianity and Literature.

His eleven poetry books include: The Company of Strangers (1975), Sacred Conversations (1998), Divine Margins (2009), and his most-recent poetry collection The One Certain Thing. (2021, Carnegie Mellon University Press). This book of elegies, written in the wake of the sudden death of his wife of fifty years, has been described as a “three-part conversation between the speaker, his wife, and God.”

The following ekphrastic poem first appeared in The Christian Century. This link provides an image of the Fra Angelico painting that inspired the poem.

Light from my chosen star will come to me
in morning prayer, but only if I beg,
desperate like the unfortunate I met
yesterday morning, New Orleans 8 a.m.
corner Claiborne and Carrollton.
He lifted both palms up, that’s how I pray
we’re brotherbodies Fate estranged—
I’m sure the stars pray in dazzling choirs
or singly, hands clasped to their chests
like Fra’s angel, kneeling, left knee bent,
facing Mary, supernal light gracing the porticos.
This visit that might have changed the world.

If only I could transcribe the painting’s beautifuls!
But here I am, exhausted as if I’d spent the night
sleeping in the park the way he has to,
ashamed of the comparison but praying this
on one knee beside my bed, asking myself,
asking the morning star and you and You,
why did I drive by, not giving him a dime?
How dare I try to compare myself, twice,
to the angel, to him, both, I’m twice-ashamed.
And, say it, afraid, twice-afraid to write this.