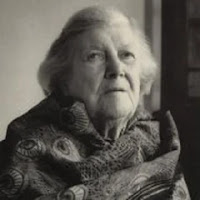 Ruth Pitter (1897—1992) is a British poet who published eighteen collections, and received many honours, including the Queen's Gold Medal for Poetry in 1955. In 1974 she became one of the twelve living writers honoured with the title Companion of Literature by the Royal Society of Literature.

She did not embrace poetic modernism — so popular in her day — and because of this has been largely overlooked in ours. Fellow formalist poet Philip Larkin included four of her poems in The Oxford Book of Twentieth Century English Verse (1973) — and she has been lauded by several poets and critics. Elizabeth Jennings said in the introduction to Ruth Pitter’s Collected Poems (1996, Enitharmon) that her poetry shows “an acute sensibility and deep integrity.”

Since the wrestling between critics for influence continues, only time will tell whether Ruth Pitter will gain new popularity, or slip into obscurity. Kathleen Raine has expressed she believes Pitter’s poetry “will survive as long as the English language, with whose expressiveness in image and idea she has kept faith, remains.”

The following poem is from Pitter’s book A Trophy of Arms (1936) and is the title poem in a new critical edition of her collected poems, edited by Don W. King (2018, Kent State University Press).

All was as it had ever been—
The worn familiar book,
The oak beyond the hawthorn seen,
The misty woodland’s look:

The starling perched upon the tree
With his long tress of straw—
When suddenly heaven blazed on me,
And suddenly I saw:

Saw all as it would ever be,
In bliss too great to tell;
For ever safe, for ever free,
All bright with miracle:

Saw as in heaven the thorn arrayed,
The tree beside the door;
And I must die—but O my shade
Shall dwell there evermore.