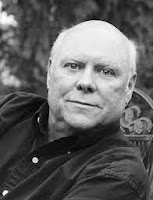 Richard Jones is an accomplished poet, who has been the editor of the journal Poetry East ever since he founded it in 1980. He has taught at DePaul University in Chicago since 1987, and is the author of more than a dozen books of poetry, including The Blessing: New & Selected Poems (2000, Copper Canyon).

His latest collection is Stranger on Earth (2018, Copper Canyon). Andrew Jarvis wrote in the New York Journal of Books that most of these prose poems are “…derived from memories, and Jones utilizes his memories of family, history, and culture to craft poems full of clear images and rich detail…” He says the “concept of beauty, and all things beautiful, is explored in the majority of these poems…” and points out that Marcel Proust’s philosophy ― “Life of every day is supremely important” ― is central to the book.

Back in 2007 when a number of artists (including poets B.H. Fairchild and Sydney Lea) were asked by Image to express why they believe in God, Richard Jones responded straight-forwardly,
----------“I believe in God because the poetry of the scriptures
----------revealed him to me. By God’s grace I opened the Bible
----------and discovered his near and palpable presence. Now, when
----------I read, illuminated by the Spirit, I give thanks as I find
----------myself abandoning my own limited understanding to seek
----------his perfect will…”

The night of the Perseid shower,
thick fog descended
but I would not be denied.
I had put the children to bed,
knelt with them,
and later
in the quiet kitchen
as tall red candles
burned on the table between us,
I’d listened to my wife’s sweet imprecations,
her entreaties to see a physician.
But at the peak hour—
after she had gone to bed,
and neighboring houses
stood solemn and dark—
I felt no human obligation
and went without hope into the yard.
In the white mist
beneath the soaked and dripping trees,
I lifted my eyes
into a blind nothingness of sky
and shivered in a white robe.
I couldn’t see the outline
of the neighbor’s willows,
much less the host of streaking meteorites
no bigger than grains of sand
blazing across the sky.
I questioned the mind, my troubled thinking,
and chided myself to go in,
but looking up,
I thought of the earth
on which I stood,
my own
scanty plot of ground,
and as the lights passed unseen
I imagined glory beyond all measure.
Then I turned to the lights in the windows—
the children’s nightlights,
and my wife’s reading lamp, still burning.